Paradoxes are interesting logical structures which might look as true but are internally contradicting.. They are many times ‘invalid’ (logically) , but are very helpful in promoting critical thinking … They are very interesting in literature and philosophy, and a very good mental sport

A basic form of paradoxes is the ‘liar’ paradox …If I say : “This statement is False.” …. If it was false, then the statement itself is true, then it is false , then it is true and so on …

Many people mention the Epimenides “Cretans are always Liars” as a paradox,well … it is a paradox only in one condition … here it is  :

A monster steals a son from his father, and promises to return the child if the father can correctly guess what the monster will do. What happens if the father guesses that the child will not be returned to him?

Now for a relatively more popular one :

Wait … What ? Ok this works if you believe in parallel universes (somehow), and at every jump back in time there is a split of universes …

For a more religious one :

Can God create something so heavy, that He cannot lift it?

Some resolutions of this statement include saying that “can not lift” does not make sense, or that the question itself is a contradiction, like a “square circle”.

An interesting paradox that relates logic to identity , and thinking about being is the paradox known as the Ship of Theseus … ( See this ) …. Also if you do get the chance , watch the brilliant movie with the same title..

A great genius created amazing visual paradoxes … the artistic/mathematical/geometric genius here is the great M.C. Escher (Maurits Cornelis Escher) … he created many amazing paintings that exploit illusions to create brilliant visual paradoxes and here are some of them : 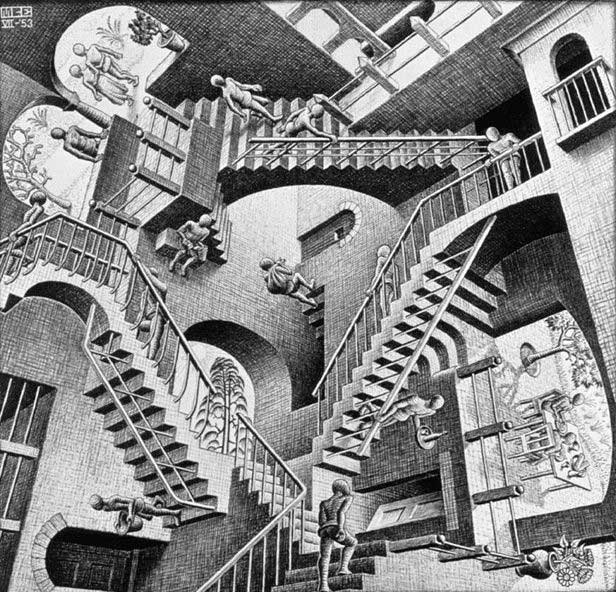 Escher – Relativity – Which way is Which ?

Escher – How is the water flowing … Up or Down ?

The Beauty of the Paradox

Søren Kierkegaard, in the Philosophical Fragments, that

(..) The paradox is the passion of thought, and the thinker without the paradox is like the lover without passion: a mediocre fellow. But the ultimate potentiation of every passion is always to will its own downfall, and so it is also the ultimate passion of the understanding to will the collision, although in one way or another the collision must become its downfall. This, then, is the ultimate paradox of thought: to want to discover something that thought itself cannot think